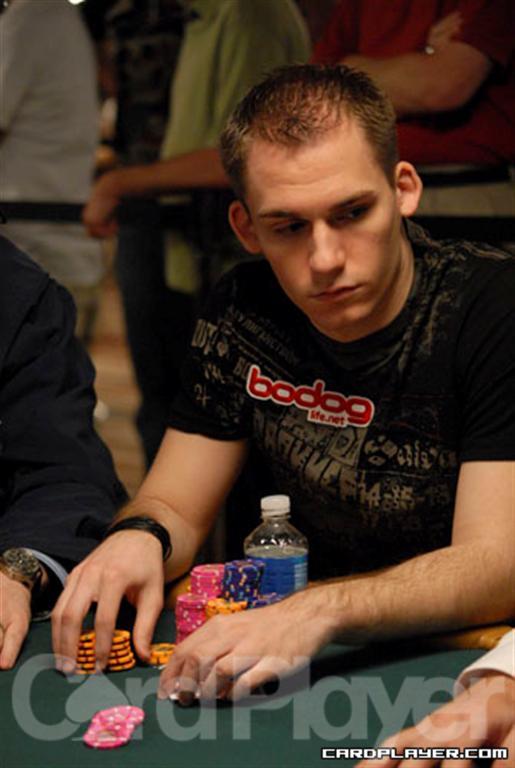 Justin Bonomo´s poker career has come a long way since he (as "ZeeJustin") was implicated in several online poker multi-accounting cheat scams. In recent times, he has been doing his best to support the integrity of online poker as a Bodog online poker team member and he seems to be credible at this. But his real thrust forward has been as a professional poker tournament player. Bonomo has become a force at the WSOP and other major tournaments throughout the world, not only in no-limit hold'em but in a variety of poker games including Omaha Hi-Lo and pot limit events. In addition to having already earned more than $2 million in tournaments, he has been raking in the chips in cash games. The Bodog online poker team member is quickly becoming one of the top ten live poker players in the world.

And it appears he's doing all of this without cheating the poker tables!

Possessing a great intuitive poker brain and using a fearsomely aggressive style that he combines with his online poker skills, Bonomo is going to continue to be one of those special few poker players who can dominate both brick and mortar and online poker.

Let's just hope that his career as a poker cheat is over!
Posted by Richard at 3:17 PM

In the middle of yesterday's WSOP Main Event action, Phil Hellmuth, who is teamed up with the online poker scandal ridden site UltimateBet, raised under the gun while his table was being featured on ESPN. Suddenly, Todd Witteles, who goes by the name "Dan Druff" and was playing at the same table, said sarcastically to Phil, "Can you see my cards? Oh wait, I forgot, we're not on Ultimate Bet." Of course he was cracking about the huge UltimateBet cheating scandal, in which UltimateBet employees Russ Hamilton (1994 Main Event winner) and others used their master accounts to cheat players out of millions of dollars by reading their hole cards. Hellmuth defended himself by saying, "So a company has some low-level employees do some dishonest things that people don't know about for awhile. Do you blame everyone in the company for that?" Before the argument could escalate, a WSOP floorman intervened and gave each player a warning.

No, Phil, you're not responsible for the UltimateBet cheating scandal, but you're still a poker brat!
Posted by Richard at 8:44 AM

Australia has long been a favorite haven for professional casino cheat teams, and I myself used to love going Down Under only to resurface with loads of profits! With its giant casinos that rival the size of the biggest US casinos, and perhaps its less capable or nonchalant surveillance departments, casino cheat teams have found some friendly confines in which to ply their crafts.

I have been receiving steady reports through June and the first week of July of pastposters, shuffle-trackers and poker and slot machine cheats. Conrad Jupiters seems to be the Foxwoods of Australia, meaning, of course, that Conrad Jupiters is Australia's most cheat-prone casino. Strangely enough, that casino has also been the target of dozens of complaints about gamblers leaving their kids unattended in and around the casino.

There have been more than 1400 complaints of casino cheating within the last year at Brisbane and Gold Coast casinos, including sharp rises in the theft of casino chips and coins. There have also been credit scams and reports of cheating in poker rooms. I imagine the Russian card-swapping and collusion teams are having a field day there!

Conrad Jupiters' managing director Stuart Wing said the company was happy for the information to be in the public domain. Mr Wing said the company's commitment to regulations was displayed in any increases in statistics. That he would have to explain to me. Remember a large number of reported cases does not mean surveillance is doing a good job catching the cheats. It means that the casino is rather easy to cheat.

"We work to close any loopholes that are found," Mr Wing said. "It shows we are responsible managers of a casino operation. We have a very pro-active stance on regulation."

In spite of Mr. Wing's supposed commitment to regulation, Conrad Jupiters and other casinos have also had problems with licensing dealers, such as breaking the law with "official" letters showing a dealer worked the tables at the Gold Coast casino last December despite being unlicensed.

In some of the 525 internal procedural breaches last year, a three-month audit of the operation of the game of craps found violations at the same Broadbeach venue. It found "dealing inconsistencies" had occurred for some time but the details have been blacked out by FOI officers for commercial-in-confidence reasons. In another case at Jupiters in Townsville in December, the integrity of 12 decks of the casino's official playing cards were compromised when a staff member left them on top of a roulette touchbet terminal.

Wow!...It might be a long flight to get Down Under, but it sure as hell seems worth it--if you're a poker or casino cheat.
Posted by Richard at 8:11 AM

Over the past several months, several casinos in Northern Nevada have been subject to an advantage play attack of their blackjack games known as “sort” play. In order to take advantage of “sorts”, the advantage player must first find a casino that offers a hand dealt blackjack game where the players handle the dealt playing cards. Second, the advantage players need a casino that also uses playing cards that have a pattern back that covers the entire playing card. One particular brand of playing cards that has been attacked is the US Playing Card company’s “Aristocrat” brand. Any of the other manufactured brands with a full back pattern could be subject to sorts as well. Sorts are created when a card is not symmetrically cut during the deck’s printing process. All casino quality playing card decks are printed on 60 card sheets, and are cut from the sheet using a two-step process. This process, although done with an automatic cutting machine, is not perfectly symmetrical. The cut may result in all cards of that deck having a very slight pattern difference on the sides or ends. Since the cards are printed with a full back design of diamonds, gems, or intersecting lines, sometimes cut pattern differences can be noticed by the trained eye. Although this is not common, it can happen. If the difference is too great, and the cut patterns can be read when sitting within several inches of the dealer held deck, the casino is open for a sort attack.

Sort play occurs when a group of players take over the entire table. After the cards are dealt, the team of players will position or turn their cards in a particular manner so one of the miss-cut pattern sides faces in the same direction when they slip their hand under the wagered chips. For example: the sort players may opt to position the ten value cards with all elongated diamonds on the back pattern facing to the right when the cards are positioned under the wagered chips. In this case, all non-ten value cards will be rotated 180 degrees in the opposite direction. The sort players will continue to keep turning the cards in the same manner throughout the dealing of the deck. Once the dealer shuffles the cards and begins to deal the next deck, the player will resume turning the cards until they have a majority of the playing cards positioned so they can be read to indicate the top card of the deck is either a ten or non-ten value card. In essence, the advantage player uses the miss-cut sort patterns to gain information just like a cheater uses marked cards.

How effective is blackjack sorting overall? It can be very effective when the right conditions are found, but I would not suggest it as a bread and butter advantage play weapon for advantage play teams. It serves best as an additional advantage play when you are already working your main advantage plays, such as card counting and ace-tracking.
Posted by Richard at 8:14 AM

Sleight of hand and cheating at gambling has long been a marriage made in griftingland, but now the Black Widow Cheating gadget, which is being called the best sleight of hand illusion switching device in history, has got casinos worried that crooked dealers will start using it to snatch big-denomination chips off their casino tables. Cheating casino dealers have long used palming techniques and various gadgets up their sleeves for ripping off their blackjack, craps and roulette tables of chips, but the Black Widow apparatus is reportedly so good and so fast that even if casino surveillance cameras filmed a dealer in the act of using it, nothing would show up on video.

This seems like real HOT SHIT to me! As of now, no evidence has come up concerning the use of a black widow in a casino, but you can bet your last chip that they are already out there on the tables. If you want to see a black widow in action, just go to YouTube.
Posted by Richard at 8:20 AM

I don't know if these University of Pennsylvania business students read on my blog how Connecticut's two casinos, Foxwoods and Mohegan Sun, are easy pickings for professional casino cheat and card counting teams, but if they didn't they sure learned about it somewhere! Reports have been coming in to me that highly advanced card counting teams made up of business students at the Wharton School of Business, the highest regarded business school in the US, have been doing a number on these two casinos, which I had visited just a month ago. I did see some good card counting teams at work there, but I can't say if I saw the Ivy Leaguers working the blackjack tables. According to my source, these teams are highly sophisticated and are playing mainly black $100 chips. I have been told they are as good as the MIT blackjack card counting teams of the '90s, but in any case, this is not mindboggling that blackjack card counting teams can still beat the hell out of casinos for big money after all the publicity the blackjack card counting movie "21" shined on the card counters. This is because the casinos can still be fooled by it, and they probably don't care that much anyway as the same movie has brought them many more wannabe card counters who are really just losers to the blackjack tables. To date, Connecticut's casinos are in the hole over a million bucks to these Wharton guys, and that is just this year!
Posted by Richard at 8:54 AM