Who Really is Phil Ivey? Poker Phenom, Casino Cheat...or Both?

I, for one, think it's time to take a good look at Phil Ivey, and try to answer these questions. First of all, I want to remind everyone how I tried to expose the vast cheating that goes on in the professional poker world, especially in tournament play including the World Series of Poker. I wrote about this extensively in my   2006 book "Dirty Poker," and was severely criticized for it. In the book I wrote about huge and powerful poker tournament syndicates that were controlled by Men Nguyen and other highly visible and successful poker pros.

Which leads us to two questions: 1) Was or Is Phil Ivey a leader or member of one of these tournament syndicates that specialize in touornament collusion play, chip-dumping, slow-playing, chip-passing and other dirty tactics to bully their ways to final tables? And 2: Did Phil Ivey actually plan and design the huge baccarat cheat coup that he carried out at Crockfords Casino in London?

Let's start with  the second question. It is highly probable in my mind that Ivey saw a huge chance to capitalize on his celebrity to take this free shot at Crockfords without any risk of actually getting busted or charged with a crime (and to boot the UK goes very light on even convicted casino cheats). He also figured that even if Crockfords was suspicious after the cheating play went down, they would have a tough time trying to renege payment to Phil Ivey. On that point he clearly miscalculated the Brits' hatred of being conned.

So what could've happened? How did the defective cards make their way into Crockfords? Did Ivey approach someone who knew someone working for the card-supplier or manufacturer? Did someone working there know someone who knew Ivey? All this is tough to speculate, but I can tell you this: I get hundreds of emails each year from people who want to get me involved in lots of poker cheat and casino cheat scams, and some of them are so good they're even tempting! So Ivey probably found this irresistible if it was indeed brought to him by someone else.

However, I gotta believe that Ivey knew some key people with connections to the card-supplier (probably someone who used defective cards from the same company before in other casino scams) and laid it all down himself.

Now, back to question 1. Was Phil Ivey involved in active poker cheating? Now, I have absolutely nothing against Phil Ivey the way I do against Daniel Negreanu, but I have to say that it is highly likely that Ivey, if cheating casinos, was also cheating poker tournaments...and then who knows what happened in some of his legendary high-stakes poker games where he took millions off billionaires? And then there is his participation in High Stakes Poker and other TV high stakes poker-game shows. I always believed that these shows were bullshit and nothing more than a con to get the participating stars more money and publicity, that all the huge pots were fake and that all monies won and lost were returned to the players at the end.

And remember that huge huge hundred-million dollar freeze-out that Ivey and seven other players were supposed to play under some dome in Las Vegas back in 2006? I can't remember the name of it, but I do remember clearly that soon after I badmouthed it, it fell apart and nevre came off.

So, final thought...Phil Ivey may be almost as vile as   Russ Hamilton, the ex WSOP champ who designed and carried out the Ultimate Bet online poker cheating scam. I am sure we will be hearing a lot more about Phil Ivey cheating at poker and cheating at casinos from people other than me!
Posted by Richard at 2:55 PM 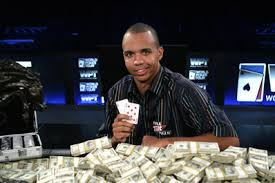 ...what Crockfords casino in London says is true, and I think it is.

Phil Ivey is now suing Crockfords to force them to pay him the $12 million he won playing baccarat with a superhot foxy companion. Of course he had to sue. If he didn´t, it would almost be an admission of guilt.

Crockfords says that the cards used in the baccarat game were defective and that their values could be read from flaws on the backs of the cards when they were face-down...and, more importantly, Ivey and his pretty lady companion knew it.

According to Crockfords, Ivey entered the casino, quickly got stuck for 800 hundred grand, then went on a multiple-play $13 million winning streak over a period of two days. They became suspicious when Ivey made some peculiar requests during his play. The first thing that bugged them (and it would bug me too) is Ivey's asking that the dealers hold the cards on the felt, in some cases lifting them in the air, before he made his bets. That would correspond with Ivey able to read the card markings on the backs of the cards. If the dealers dealt the game normally, it would not have mattered if the cards were defected or marked as the dealers hands and the card shoe would have protected them until well after Ivey and his gal-pal made their bets.

The second self-incriminating action by Ivey was his insistence that the casino keep re-using the same baccarat cards after each shuffle. Casinos all across the world now trash the six or eight decks used in a baccarat shoe after every shoe to protect themselves against the now epidemic baccarat false-shuffling cheat scams as well as other baccarat scams. Ivey's insistence that the casino re-use cards is more evidence that these cards were marked by factory defect.

So, you may wonder, why would Phil Ivey, international poker star with rock star status, and extremely wealthy, want to involve himself in a casino cheat scam such as this? Well, my answer to this would simply be: Why would Donald Trump want to build another building or casino? Get it? There never is enough money in the world for these guys.

I have been asked how Ivey would have gotten in contact with someone supplying defective cards to the casino. Did someone contact him? Or did Phil Ivey himself design and orchestrate this huge casino cheat scam? Well, that one I cannot answer; I simply don't know, but the possibilities are endless. The only things I am sure about is that Phil Ivey knew those cards were defective, thus effectively marked, and Crockfords casino personnel did not know this. I am convinced that no one working for the casino was involved.

Anything that convinces me of Ivey's guilt is that Crockfords simply refused to pay Ivey's winnings, only cashing out his original gambling stake. i mean, the last thing any casino in the world wants, let alone a posh British Londonian gaming club, is to be branded a casino that does not pay its big winners. So they really have to have the goods on Ivey, a hugely popular poker star who will surely have tons of sympathy from the majority of people reading about this story.

So what will become of all this? It will simply go away. Ivey will either drop his lawsuit, or more probably the UK courts will drop it for him. No way is Ivey getting paid, and I'm pretty certain that Phil Ivey is now a major casino cheat... One more thing: I think I know who his lovely casino-cheating sidekick is; I once worked with her mother if I am right! And as I understand it, she has already been involved in two other incidents where high-rolling winning gamblers were refused payment in London casinos.
Posted by Richard at 3:16 PM