Cheating Casino Keno Via Paint on the Keno Balls?? 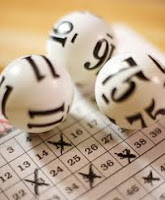 Well, the last time I heard anything about major keno cheat scams was the one engineered in Atlantic City by disgraced and ex-con former Nevada Gaming Control Board employee Ron Harris, who rigged the Random Number Generators to produce keno jackpots for his accomplices. Now we are hearing about a keno scam that might be using extra or lesser paint on some of the keno balls to make them more or less likely to get sucked up through the vacuum tube into the winner's tray.
Article:

"It is not often discussed these days in an era of RNGs (random number generators) and automated ball selection devices, but back in the day there used to be theories advanced that the way keno balls were painted might have some effect on the outcome of the selection, either unintentional or intentional (cheating.)

The idea of unintentional effect comes from the fact there is, of course, a different amount of paint on each ball, at least it appears that the number "1" for instance might have maybe 1/3 the amount of paint as the number "80." Since paint is not weightless, what’s colored on ball number 80 will necessarily weigh three times as much as the ball marked 1.

Assuming, of course, the depth of the paint layer is constant, etc.

Now, a heavier ball tends to get selected more, at least that is the theory. The theory (I call it a theory because it is plausible but never to my knowledge proven) is that heavy balls sink to the bottom in a mechanical cage and the ball selector is at the bottom of the mechanical cage.

Similarly, in a blower the theory is the heavy ball sinks to the bottom, where the jet of air blasts it straight up the tube.

So if you subscribe to this theory (I don’t) you would play numbers with a lot of paint on them and avoid those digits with less color. This theory was obviously difficult to test back in the day, but now anyone with access to enough actual game draws can do a statistical analysis of the occurrence of 1-9 vs. 10-80.

If the statistical analysis of real life occurrences indicates the weight of the paint makes any difference, you will find it there.

The real scientific question is, "Is the effect of differences in paint weight significant?" I say probably not. I think the differences in weight from ball to ball are probably just as great from imperfections in material and production process as they are from paint.

This is just my opinion though. It would be interesting if someone with a very sensitive scale could weigh a set of balls and we could actually see some results.