These guys are good poker cheats, but apparently the dealer at one of the poker tables at London's Empire Casino caught on to their cheating act. The actual surveillance photo above shows Mehmet Mersin and Suleyman Arik swapping cards under the poker table, a carefully rehearsed move they used at least seven times to net more than £5,000 in illegal winnings. Meanwhile a third man (far left), thought to be a professional distracter, engages the croupier in conversation. The third man was not arrested. Arik and Mersin are currently in prison serving six and eight month terms respectively. Arik, a Turkish national, will be deported when he is released. Mersin has been banned from entering any British casino for 10 years.

But don't think for a minute that these guys won't be pulling the same cheat moves in prison poker games!
Posted by Richard at 9:58 AM Links to this post

As we get ready to put the first decade of the twenty-first century to bed, the second twenty-first-century-decade coming will bestow upon us better and more "high-teched" cheats. First, let's examine what we will see in the brick and mortar poker rooms in the early 2010s. The key advent here will be lasers. The key scam will be marking cards with them. For more than a century, marking cards at poker has been one of the most popular cheat methods, dating back to the days of the Wild West. Every method under the sun, including using the sun itself to burn marks into poker cards, has been tried. However, poker card-marking is turning the way of the laser, where sophisticated poker cheats will use laser pens and other tiny laser devices to mark the cards and cheat the poker tables. This is one area of poker cheating that I am keenly interested in, and I will keep you abreast of how it develops.

As far as online poker cheating goes, we are already in the second decade of the twenty-first century, if not the third! Look for more scams hitting online poker from the outside and less from the inside. The outside hackers have learned a lot from the inside cheating scams at UltimateBet and Absolute Poker. They will surely use their newly acquired knowledge to write new software and crack security codes so that they may better cheat online poker games. Of course the online poker sites' security departments will be doing their best to monitor and fight the cheating, but the edge always goes to the cheats, that being both online poker cheats and brick and mortar poker cheats.
Posted by Richard at 9:18 AM Links to this post

Another Casino Cheat Complaint in India

This article sounds like a joke, when you read the various ridiculous-sounding currencies involved, but evidently it is not.

The tourism minister for the resort province of Goa, Fransisco Pacheco, yesterday filed a complaint against a casino operator for cheating him to the tune of Rs 1.25 crores, the money which he had won in the casino. What the heck are crores??? I thought Indian money was rupees!

The minister has filed the complaint with Colva police station against in-house casino at Majorda Beach Resort in South Goa. Pacheco has said the casino operator has failed to pay him money despite his winning the gambling between May 15 and May 22 this year.

"When I asked for the money, the casino staff requested me to give them a day or two to make the payment since they never held so much of money in their treasury, "the complaint mentions. So obviously those crores are a heck of a lot of money, or Indian casinos only keep pennies available at the cage. If anyone out there can straighten this out for me, I will not only appreciate it but give you mention of honor on my poker and casino cheating blog!

The NCP minister said that he had won Rs 1.53 crores, of which Rs 28 lakhs were paid to him in installments over a period of about ten days; the last payment was received on May 28. Now what the heck are lakhs!!! I thought we were talking about crores! Please, help me understand this!

Pacheco said a partial payment by the casino operator was made only after intervention of Manish Khanna, Director of Majorda beach resort and Krishnan, the general manager of the resort.

Whatever the case, this looks like a pretty nice place. I have never cheated Indian casinos, but maybe I will come out of retirement just to get this one!
Posted by Richard at 9:52 AM Links to this post

We are more than halfway through the 2009 World Series of Poker tournaments, and many of you must be wondering how much cheating is going on at the poker tables, both the tournament tables and the cash games. Here is what I know so far:

Not much of noteworthy cheat complaints have come my way in the tournaments. I have heard some snippets about softplay on final tables and an instance or two of adding chips to stacks during breaks, but none of this appears to me to be significant. However, like I have written about many times, I expect the bulk of the 2009 WSOP Tournament cheating to take place during the period July 15th to November 7th, that of course being the time between the determination of the final table and the first day of play at that final table. This is when the dirty deal-making begins, which leads to softplay and chip-dumping at the final table.

In the poker ring games, however, I have heard significant reports of cheating from several different sources. The Russian collusion teams have been hitting the mid-stakes tables, mostly between $15/30 and $75/150. There are three Russian poker cheat teams that I know of, and they are all excellent. They avoid the bigger games because they are hesitant to engage the well-known pros who play them, not scared of their play but rather scared of being detected.

Their is also a card-switch team working both the mid-level and big games. This is the team that is based around the L.A. card clubs, whom I have seen in action on four occasions. They have about fifteen members know, equally divided between men and woman, and they are all excellently trained and never have a losing session.

If anything else on cheating at the WSOP comes my way I will post it.
Posted by Richard at 9:22 AM Links to this post Yes, it´s true. DiCaprio has announced that he is making a movie about the Online Poker Industry in Costa Rica, and no doubt this has been fueled by the huge UltimateBet and Absolute Poker Online Poker Cheating Scandals and Scams. I don't know how much of movie will entail actual cheating online, as the script is being kept secret, but you can bet it will be heavily depicted. I imagine that this yet untitled film will be released sometime in 2011, and all I can say is that I hope it's better than all these brick and mortar poker films we've been subjected to the past few years.

Also, the new poker documentary All-In has been released this week. I haven't seen it and don't know how and if it treats cheating in poker, but I imagine it's a bad as all the rest of them. If any of you see it, let me know how much poker cheating there is in it.
Posted by Richard at 12:36 PM Links to this post 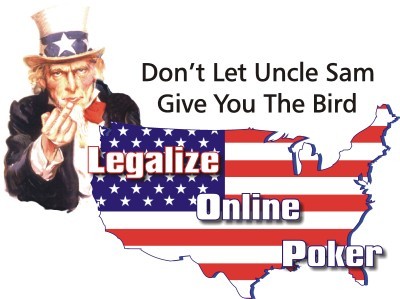 Prosecutors' seizure of $34 million belonging to online poker players ups the ante in a long-running struggle between the Justice Department, which wants to shut down the online-gambling industry, and members of Congress who want to make it legal.

The government has used several laws to prosecute online gambling. Critics claim those laws are unclear and are sometimes contradicted by a patchwork of state laws.

Last month, Rep. Barney Frank (D., Mass.), chairman of the House Financial Services Committee, proposed legislation to legalize and regulate Internet gambling so revenues could be taxed and consumers would have some protections.

The Poker Players Alliance, a lobbying group, said there are 10 million Americans who play online poker for money, spending about $6 billion a year. The group attacked the recent seizure, carried out by the U.S. attorney in the Southern District of New York, saying funds belonging to 27,000 online poker players were frozen. The U.S. attorney's office declined to comment.

"It's a big gamble by the Department of Justice," said Prof. I. Nelson Rose, a senior professor at Whittier Law School and a leading expert on gambling law. The seizures could lead to a court ruling that actually supports Internet poker, Mr. Rose said.

Previous efforts in Congress to legalize and regulate Internet gambling have failed because of opposition by conservative Republicans and others who worry it would encourage gambling, particularly among gambling addicts and minors.

Mr. Frank and other legalization advocates argue that Internet gambling is a reality, and that consumers would be better off if there were some rules in place to require games to be run fairly and to require age verification of players.

"You've got an industry that already exists. You can't shut it down," said Jan Jones, vice president of government relations for Harrah's Entertainment Inc. Harrah's is one of several companies pushing Congress to legalize online gambling. Ms. Jones said the company would like to enter the business itself.

Rep. Spencer Bachus of Alabama, the ranking Republican on the financial-services panel, has blasted Mr. Frank's legislation, calling it a "clear danger to our youth, who are subject to becoming addicted to gambling at an early age."

The seizures by the U.S. attorney have sparked outrage among online-poker enthusiasts. "I'm screaming mad," said Mike Markee, an online-poker player from Flint, Mich., who said he can't afford most other forms of entertainment. Mr. Markee said he has spent only $123 in the past two months playing Internet poker at least two hours each day.

He said he has stopped playing for now, because he is worried about the government seizures. "I didn't think it was technically illegal. I don't want to jeopardize my job," he said. After the seizures, he emailed his congressional representatives to urge them to protect online poker.

The government has prosecuted online-gambling sites for years, and views most Internet gambling as illegal -- with some important exceptions. Online horse betting is legal in some states, for example. Online gambling sites are legal in many countries outside the U.S., but companies in the industry tread on dangerous legal ground when they cater to U.S. players.

The EU said Wednesday it would hold off on filing a formal complaint in hopes of negotiating some sort of solution with the Obama administration.

"Internet gambling is a complex and delicate area, and we do not want to dictate how the U.S. should regulate its market," said EU Trade Commissioner Catherine Ashton. "I hope that we will be able to reach an amicable solution to this issue."
Posted by Richard at 11:15 AM Links to this post