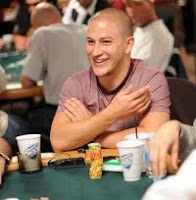 With over $2 million in live poker tournament winnings and an impressive online poker resume, Matt Marafioti is widely considered one of the better pro players out there. However, the Canadian’s name has been dragged through the mud over the past couple of days after an alleged Skype conversation between him and another player was leaked on the TwoPlusTwo forums.

The 2p2 thread begins with a posted Skype conversation (sent to poster via email) between Marafioti and a Swedish online poker player named Samar Rahman. This already leads people to jump to conclusions because Rahman has been accused of cheating players such as Patrik Antonius in the past through elaborately-placed computer viruses. But things get worse when the conversation alludes to hacking into other players’ accounts so Marafioti and Rahman can see opponents’ hole cards.

Seeing as how it’s possible to manipulate a Skype conversation before posting it to the internet, it’s tough to verify 100% accuracy in this matter. However, most people in the TwoPlusTwo thread feel Marafioti and Rahman’s conversation about cheating other players follows a realistic flow for an IM conversation.

Perhaps more damning are the character issues here because both Marafioti and Rahman are pretty questionable people. Marafioti has gained quite a bit of attention for his melodramatic twitter posts and incessant cursing while Rahman is rumored to be a skilled computer hacker – as mentioned before.