Wow! Imagine this scenario: Lance Armstrong hits a royal flush on the river and wins the BIG ONE! Would you think he did it legitimately or did super cheat Lance somehow pull a poker cheat move to take home the bracelet and the booty?


Well, I know what I´d think! Why am I writing about Lance Armstrong on my poker cheat and casino cheat blog? Because his dastardly acts cerainly deserve mention, and as poker is considered a sport by the international media, and as many professional athletes play in the World Series of Poker, there is a definite connection between poker cheating and cycling cheating.

But what I really want to say is that Lance Armstrong is the biggest cheat and fraud in sports history. He is worse than Russ Hamilton, the demonic figure who bilked tens of millions from online poker players in the UltimateBet poker cheat scandal. He is far worse than Roger Clemens, Barry Bonds and Sammy Sosa. Why? Because those three steroid-shamed baseball players were likely Hall of Fame ballplayers before they turned to steroids, certainly Bonds and Clemens were. But Armstrong, who won seven Tour de France cycling competitions in a row, probably would have not only failed to win a single one but as well may have gone literally unheard of on the cycling circuit, if he even qualified to enter a race.

So with this in mind, I really don't care how Lance Armstrong comes clean tonight on Oprah winfrey`s show.   He has lied and cheated for more than a decade, threatened and bullied anyone who dared expose him, and for sure is only coming clean for his own benefit to get himself reinstated in triatholon competitions or whatever. He is not doing this because he`s truly sorry for his cheats and lies.

So if you ever have the misfortune of seeing Lance Armstrong at the poker table, simply pay him your disrespect by getting up and walking away.
Posted by Richard at 6:51 AM Links to this post

Remember, the big high-stakes, high-tech poker scam busted up in a penthouse suite at the Atlantic City Borgata hotel and casino? If not, its the one that ex-casino game protection consultant and convicted casino cheat Steve Forte was originally accused of engineering. Supposedly high-tech cameras and computers were used to film players' hole cards and transmit the information to cohort poker cheats taking down the victims at the table.

In the "Vegas version,"the casino boss character Mia askes the character Jack to figure out how a poker cheat from Providence is cheating high-stakes players in a private game in a hotel suite. Jack convinces Mia to let him play in the game and he figures out that the poker cheat is working with another poker cheat who is spying on the game from the room above. Of course he is doing this through a hole in the ceiling.

My take: Well, I would think the creative writers for the show could come up with something a bit more original, and at the same time I`m wondering if they used Steve Forte as a production consultant.
Posted by Richard at 2:25 PM Links to this post

It`s rare when a casino employee at the top level blows the whistle on his casino, but that`s what happened at the Riviera Casino in Las Vegas.

I know the Riviera quite well. It used to be one of the top and glamorous casinos on the Vegas Strip. When I first arrived in Vegas in 1976 as a nineteen year-old, I legitimately beat its baccarat pit for a hundred grand--before giving it all back and then some in a single day. You might say that my Riviera experience directly led to my career as a professional casino cheat.

According to the Huffington Post, the former security director of the Riviera Hotel and Casino in Las Vegas says he was fired for reporting that the casino rigged one of its slot machines. Douglas A. Poppa is suing the Riviera for wrongful termination and whistleblower retaliation, Courthouse News reported Tuesday. Poppa's lawyer, Sharon L. Nelson, told The Huffington Post on Tuesday that the case "falls squarely" under Nevada's whistleblowing protections. "Mr. Poppa did the right thing and attempted to correct a wrong perpetrated by the Riviera against the public and its customers," Nelson wrote in an email. "In objecting to what was clearly illegal conduct, Mr. Poppa complained to the proper authorities and for that his career was abruptly and unlawfully ended."

The Riviera noted it had yet to be served with the papers, but a representative for the hotel-casino said Poppa's claims were not true. "While we do not normally comment on active litigation, the claims included in Mr. Poppa’s complaint are false and totally without merit and we intend to vigorously defend against them," the representative told HuffPost in an email. "We look forward to the actual truth coming out during the course of the legal process."

In October 2011, Poppa claimed in court papers, he learned that the hotel had manipulated the payout of the "Money Blast" slot machine so customers couldn't win the jackpot, Courthouse News wrote. He reported the alleged cheating to the Gaming Control Board in November 2011 and was suspended by the hotel-casino in December. After receiving a warning by the Riviera to cease communication with the gaming board, he was fired in January 2012, the report notes.

Global Gaming Business Magazine described Money Blast as a "high-volatility slot" with a dynamite-mining theme. The Riviera, built in 1955, is attempting a renaissance under CEO Andy Choy, who took over in 2010 after the property emerged from bankruptcy, the Las Vegas Sun previously reported.

My take: Hard to believe that the Riviera engaged in slot-machine fixing, but I certainly believe it!
Posted by Richard at 2:03 PM Links to this post

Ever Wonder What Casino Surveillance Operators Look at Up There? 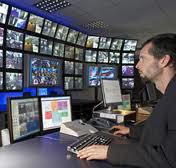 Well, this is about it.

They watch various video monitors, the actual amount depending on the size and surveillance budget of particular casinos, and very seldom see anything actually happen. Their job is pretty boring to say the least, and many operators actually do lose consciousness up there while you`re gambling or cheating down there in the casino, depending of course, on who you are.

Casinos tend to depend too heavily on their cameras, not realizing that these state-of-the-art cameras cannot tap the surveillance operators on the shoulder and say, "Hey, Rip Van Winkle, I just filmed a cheat move go down on blackjack table number 13!".
Posted by Richard at 3:41 PM Links to this post