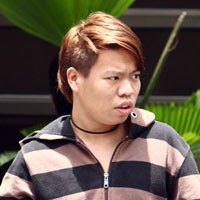 The two casino cheats who got busted last week for an inside scam on the Big Money Wheel at the Marina Bay Sands Casino got hit with 3 more charges yesterday. Keith Yong Kee-Hwei, 24, the pit supervisor and dealer (photo), and Tan Tiong Loon, 32, the player/agent, were charged with cheating at gambling in the amouont of $13,500, which happened on October 7th, and attempted cheating at gambling for a cheat move that didn't get paid.

But then they got greedy and repeated the move just a few minutes later. This time the casino got suspicious and ran back the surveillance video which showed Yong blatantly stopping the wheel with his hand.

Yong is being held on $30,000 bail, but Tan, obviously an unprofessional casino cheat, is being held without bail because he committed these alleged offenses while out on bail for another casino-cheating charge.

My take: I think this casino-cheating team oughta hang up their chips for a long time.
Posted by Richard at 10:08 AM Links to this post

Whenever I write articles like this, I always get a variety of comments. And like always, the two-dozen that have come in so far are a mixture of the good, the bad and the ugly. Here's a few of them:

Thanks for that informative article. The way you accurately broke down the case and pointed out the facts that cannot be argued, I have to agree with you that Steve Forte is guilty of conspiracy and had to be a participant whether or not the scam ever got to its operational stage.

I have never met Steve Forte or you, but objectively speaking I think you are probably right. After reading your article I went to Forte's website and found the following paragraph written by Forte, which is curious, and certainly makes Jason England's article claiming Forte's innocence appear biased in Forte's favor.

"For those of you who have asked about the Gambling Protection Video Series, I have cut a deal with, and transferred the rights to, my friend: Jason England. Jason is one of many people over the years who have asked me to convert the series to DVD..."

A judge dismissed the case against Forte. I don't know what planet you live on, but on Earth that means he is INNOCENT!

I get the feeling reading your article that you are one of those know-it-alls who thinks he's always right. In this case, I don't think you are. I am sure that Mr. Forte had some viable reason for being in that hotel room...maybe it was a girlfriend or sex thing, but not setting up a person to be ripped off playing poker.

YOU ARE A FUCKING IDIOT AND JEALOUS OF STEVE FORTE!
Posted by Richard at 8:27 AM Links to this post

If you didn't know, the CEREUS Poker Network was bought by Blanca Games, now run by Stuart Gordon. Annie Duke was asked by Poker News Daily what she thought about this transaction. She responded, "It´s a very positive thing for the brand. The cheating was purportedly under the auspices of Excapsa in terms of software development and the person developing it was able to get into the group through his involvement with them. I´m happy that the brand is making a clean break from that, and that’s part of being able to move on. I´ve always felt like the full brunt of what happened was really put on the current UB.com management. I have tremendous faith in Paul Leggett (Tokwiro Enterprises COO). My understanding is that there won´t be any change in terms of his role. I think perhaps this will be an opportunity to do some house cleaning, but I don´t really know. Paul´s staying is a good thing because in every aspect of what´s happened. When you look around and see how he´s behaved, he’s been the most forthright and the most forthcoming. He´s had the most integrity and he´s taken a lot of blame. He´s gone above and beyond and I´ve been very impressed with how he´s handled everything that´ happened.
My take: Gimme a break, Annie! How much is Leggett paying you for this?
Posted by Richard at 11:03 AM Links to this post

This one really caught my eye! In a span of less than an hour, three people cheated the Turlock Poker Room and Casino out of more than twenty-five grand by marking the cards, apparently in quite an unprofessional way. Finally, when they got too greedy, surveillance caught on to their cheating scam.
Arrested were a floor supervisor and two players at the table, all charged with 11 felonies including conspiracy, burglary, grand theft, winning by fraudulent means and cheating at gambling. The supervisor was identified as forty-six year-old Robert Younan. The players were Gabriel Rodriguez, seventy-one, and In Cha Say, fifty-eight.

Casino surveillance got wise to Rodriguez and Say making blatant deviations from basic strategy blackjack, which seems like foolish play unless you keep winning, which is what they were doing--in huge amounts. It was then determined that the players had marked the cards with a grease-like substance, marking ten-value cards on the corners and sevens, eights and nines on the middle. The cards were not marked on the game, however. They were marked elsewhere beforehand, and Younan, the supervisor, was able to switch the marked cards into the game when his cohorts hit the table.

My take: Amazing that they got ahead $25,000 grand in such a small casino. This shows two things: One, that the blackjack cheats and supervisor were incredibly greedy and/or stupid; two, the casino floor personnel were incredibly inept not to catch on to them after the first few hands. Even though they could not have seen the marking taking place, the cards should have been removed from the game after a few winning hands for large bets that showed successive deviation from basic strategy.
Posted by Richard at 10:50 AM Links to this post

Seeing how easy it is to cheat Singapore's new casinos, some of their very own employees are getting into the cheat-free-for-all. Loads of dealers and pit personnel have been getting away with it so far, but finally one inside scam has been broken up. It occurred on the Money Wheel game, not a place where high rollers usually lay their wagers, which might have clued the casino into the fact it was being cheated by its very own.
Three Chinese nationals were charged last Thursday with cheating the Marina Bay Sands casino out of more than $18,000 by getting the dealer to control the spinning wheel of the game. The dealer who also served as a pit supervisor has been identified as twenty-four year-old Keith Yong Kee Hwei. One of the cohort players at the table has been identified as thirty-two year-old Tan Tiong Loon. Loon made a bet at 45 to 1 and Yong controlled the spinning wheel to make Loon's bet win, which looked like a huge, lucky longshot in the works. There were other unidentified players involved in the cheat scam.

This is the first incident of a casino employee being charged with involvement in an inside scam. I expect to see more of this as the cheating appears to continue to be extremely ripe in Singapore's two virgin casinos.
Posted by Richard at 10:27 AM Links to this post