If you're a brick and mortar poker player, especially in the UK, you know about the "English-Only" rule that is strictly enforced in British casinos. Although it is also enforced in all US poker rooms, this rule stating that players at the table may only converse in the English language is less adhered to in the US. The reason for the rule is plain and simple: allowing players to communicate verbally only in the world's most common language makes it more difficult for collusion players and other cheaters speaking foreign languages to advance their poker cheat scams via communication.

In Canada, however, many see this rule as unfair. Although English is the dominant language in Canada, French has equal official status and is spoken by the natives of the country's largest province, Quebec. French-Canadian citizens playing poker at casinos in chiefly English-speaking provinces feel they are being discrimnated against when told they may not speak French at their poker tables. They certainly have a point when you consider that French is an official language of Canada. As far as the casinos in Quebec go, I am not sure of each one's policy but I believe both languages are permitted at the poker table. In any case, I think there are generally enough bilingual (English and French) poker players in Canada to recognize any cheat-conversation going on in either language.

The Canadian government will probably have to get involved in this if the problem continues to disturb casino poker games. I am told that some casinos will open up French-only tables upon request, which to me seems like a pretty fair consideration on the casinos' part. In the meantime:

It means "cheating prohibited!"
Posted by Richard at 9:15 AM

Can Poker Cheats and Casino Cheats Succeed Better Than Honest Players Outside the Poker World?

Great question...but the answer is easy. Many ex-poker and casino cheats do exactly that, and I'm not just talking about cheats who retire to go on to careers consulting to poker rooms and casinos in the areas of table game protection and anti-cheating. I'm talking about ex-cheats moving into fields that have nothing to do with casinos and poker.

One profession where ex-casino and poker cheats fare quite well is that of practicing law, often big-time law such as Wall Street class-action suits and big-business mergers. Why is this? I think it's because that thrill of pulling the wool over someone's eyes exists in big-time lawyering just like it is when cheating casinos and poker tables. Case in point is a friend and ex-casino cheat partner of mine who was involved in winning a seven-figure settlement for his client who was injured due to negligence--in all places, a casino! LOL but it is true. I cannot mention this person's name but can assure you that in the courtroom his "claim" was as effective as when he was claiming a pastposted bet I slipped in on a roulette layout.

I guess this avenue of success after a life of casino and poker cheating comes from the fact that people who do cheat in casinos and in poker games are, whether you like it or not, more intelligent than the average honest person or gambler. Please don't get pissed at me for saying this but it is true. In no way am I saying that ex-cheats have better chances for success in honest fields than anyone else, only that strong mental acuity sometimes leads to wanting to win via the shortcut. In fact, there may be some form of character defect that leads a person down the path of cheating at poker and blackjact. In my case, it started as degenerate gambling and evolved into cheating when I realized there was no other way of "earning" money in casinos except for counting cards in blackjack and other advantage-play tactics. But I never had the patience for any of those...could be my own character defect...
Posted by Richard at 2:35 PM 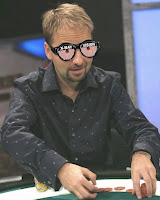 Once again, poker pro Daniel Negreanu is running off with his mouth and saying stupid things. His latest is that poker players who wear sunglasses at the table are cheating. Gimme a break! Since all poker players have the right to wear glasses, then how can the ones that opt to do so be considered cheats? Just a few weeks ago, Negreanu mouthed off about how Major League Baseball is ridiculous. I criticized him for talking about everything he considers cheating and a scam while refusing to tell the world that his and everyone else's appearance on the GSN Poker TV show "High Stakes Poker" is the biggest cheat scam of all-time. Of course Negreanu will never say a thing about that.

Negreanu’s outburst about sunglasses at the poker table is related to his latest TV show (from which he of course receives more hype and TV money) "The Big Game," which happens to ban sunglasses at the poker game on the set. The truth is that this move is nothing more than a stunt to make the public believe that the show is real and won't put up with cheating at poker. I just wish the public would wise up to all this bullshit.

Negreanu's words: “One thing I love about our show, is that FINALLY there is a rule in place where you can't hide like a chicken behind sunglasses! I swear: every TV producer should ban sunglasses entirely from any televised event. They are so bad for poker on so many levels.”

He adds that there are lots of other reason why sunglasses should be banned at all brick and mortar poker tables, even offering his aid to petition to have them banned. When asked why he would speak out so openly against sunglasses, Negreanu answered, “I won't get into that.”
Sure, Danny.

Then he drags UltimateBet cheat Russ Hamilton into it, saying, “Let's just say that guys like Russ Hamilton would oppose such a ban. I'm not making this up, it's just a fact. Banning sunglasses helps to protect the integrity of the game against cheating. For that reason alone, they should be completely outlawed from poker. No other sport or organization would allow competitors a device that makes it easier for them to get away with cheating.“

Maybe Negreanu's next advice will be that wearing sunglasses while playing poker online is cheating too! LOL
Posted by Richard at 10:09 AM

So Who's Really the Best Poker Cheat Out There?

Is it Doyle Brunson? Is it Phil Hellmuth? Is it Men "The Master" Nguyen? Could it possibly be Barry Greenstein...with a face like that? How about Scotty Nguyen? Or any other Nguyen, or for that matter, Tran?

Or is it Russ Hamilton?...Wait a minute! Let's keep this discussion limited to brick and mortar poker cheats! It would be impossible to crown the best poker cheat online; there are simply too many of them, and what makes that tougher is that the vast majority of them are well-hidden and remain unknown.

But wait another minute! Does that mean that Russ Hamilton is not or never was a brick and mortar poker cheat? Of course not. In fact, he most likely is or was, but I doubt he was the best.

The best nuts and bolts poker cheat in the last fifty years was probably Russ Georgiev, but he died recently, so unless his ghost is out there cheating, he's no longer around. So that brings me to two possibilites: Men Nguyen or anyone else out there we haven't yet heard about. I am going to of course choose the poker cheat we haven't yet heard about as the best, simply because the truly best poker cheat out there would remain unknown by definition. But for those cheats who have been caught or who haven't been but have cheating reputations, I am going to say the best around is Men "The Master" Nguyen. Why Men? Well, it's not because of any physical poker-cheat skills. As far as I know he's never been caught with solid evidence against him proving cheating. But in modern poker cheating the best cheats are the ones who organize poker cheat teams that operate over a long period of time without getting busted. Men Nguyen, more than any other major poker cheat, seems to have accomplished this. He has also allegedly engineered many tournament cheat-rings specializing in holding out chips and adding them back to their players' stacks at opportune moments.

Most professional brick and mortar poker cheat teams are of Russian or Vietnamese origin. Don't get me wrong: the Russians are about as good as it gets when it comes to organized brick and mortar poker cheating. But Men Nguyen's team is even better. Don't forget that Men has to operate at the same time he is a celebrity, and due to his reputation he is always under the watchful eyes of those who know or suspect he's a cheat. The Russian head-honcho cheats basically operate under the radar. Men, in spite of his celebrity and notoriety, has allegedly very sufficiently run one of the world's best brick and mortar poker-collusion teams for nearly three decades...and he's taken a helluva lot of heat! But he still has never been "caught."

Congratulations Men, you're the best poker cheat of 'em all...allegedly
Posted by Richard at 10:40 AM